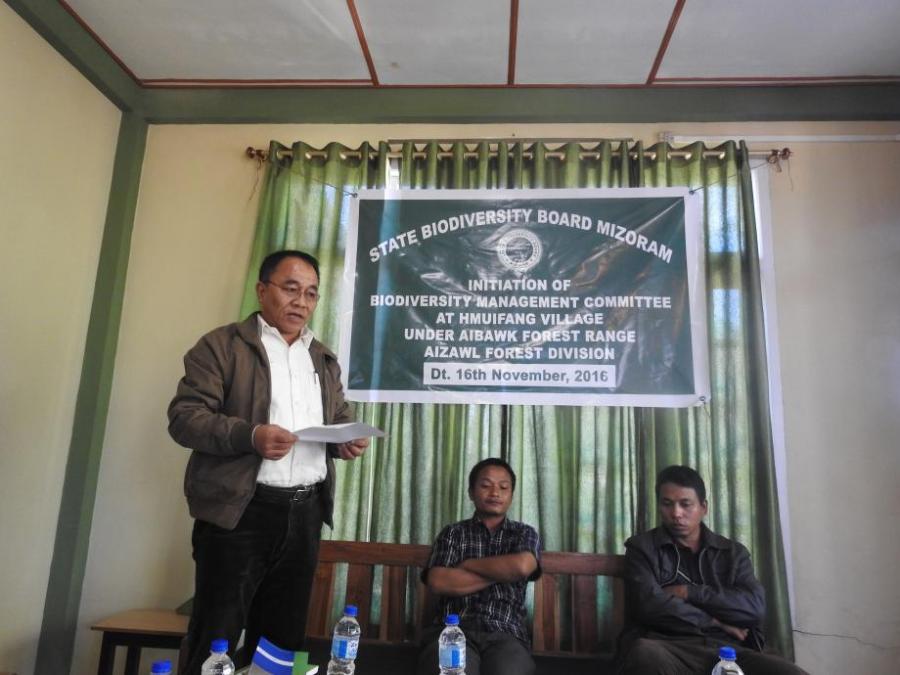 Initiation of Biodiversity Management Committee (BCM) for Hmuifang Village function was held on 16th November, 2016 by the state Environment, Forest and Climate Change department and Hmuifang Village Council.
Hmuifang is a tourist spot near Aizawl, Mizoram. It is about 50 km from Aizawl with an elevation of 1619 metres, the mountain is still covered with virgin forests reserved since the Mizo Chief's time.
A Biodiversity Management Committee (BMC) is required to be set up by every local body as part of the institutional structure for the implementation of the Biological Diversity Act (BDA) 2002. Section 41 of the Act lays down this direction. More detailed provisions of which are mentioned in the Biological Diversity Rules, 2004 issued under the Act. The ministry in-charge of the implementation of the BDA is the Union Ministry of Environment and Forests. The Act puts forth a new institutional structure in the form of three rungs, whereby decision making on access, conservation and commercial utilization of biological resources can take place. The highest rung is the National Biodiversity Authority (NBA), this is the nodal body based in Chennai. The second rung of the institutional structure are the State Biodiversity Boards (SBBs) to be established in every State. BMCs are the third rung (local level) of this new institutional structure. The BMC is to be set up by the local body both in urban and rural areas. In rural areas, local body refers to Panchayats or any other equivalent body (e.g. Autonomous District Council, Hill Council). In cities and towns local body refers to Municipalities. In areas where there are no Panchayats or Municipalities, the BMC is to be set up by any constitutionally or legally recognized institution of self government.
The BMC composition consists of a Chairperson and not more than six persons nominated as members by the local body. At least one third of the nominated members should be women and at least 18% of the nominated members should belong to the SC/ST. The Chairperson of the BMC is to be elected from amongst the members of the committee.
The Act gives broad powers to the BMC to promote conservation, sustainable use and documentation of biological diversity. This includes the preservation of habitats, conservation of land races, folk varieties and cultivars, domesticated stocks and breeds of animals and microorganisms. It is also required to document biological resources and chronicle knowledge related to those resources

We work for the conservation of nature & wildlife in Mizoram, India

Message from the Environment & Forest Minister